Most people spend up to 90% of their time indoors. This means the indoor air quality (IAQ) and overall environmental quality of homes, schools and businesses can have a direct impact on people’s well-being.

Mold and other microbial contaminants can have a negative impact on building occupant health, cause costly property damage, decrease property values and tenant retention, lower worker productivity, and increase rates of absenteeism and employee turnover.

What is mold? Expand

Mold is a type of fungus and there are over hundreds of thousands of different types of fungi. Mold is found all throughout the natural environment and can grow in the built environment when there is a food source and the correct environmental conditions (moisture and temperature). 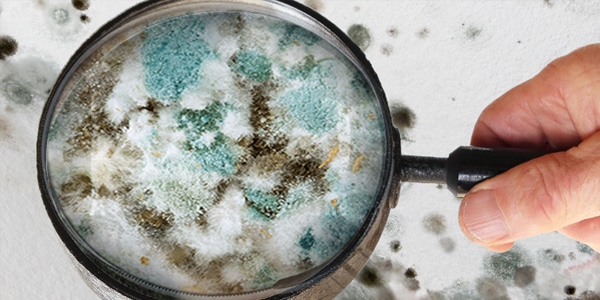 In nature, mold helps to break down dead materials and can be found all around us. As it grows, mold produces microscopic cells called “spores” which are very tiny and spread easily through the air. These tiny spores are present in the indoor and outdoor air.  Since these live spores act like seeds, forming new mold growth (colonies) when they find the right conditions like a wet, damp or humid indoor environment with a food source, they can quickly become an indoor environmental contaminant.

How to determine if a mold problem exists? Expand

For mold to grow indoors it needs moisture or elevated humidity levels and a food source. Humid weather conditions, flooding, plumbing issues or building envelop leaks can all provide for an ideal environment for mold to grow. Many building materials, and most furnishings and personal items, can act as an excellent food source for mold to grow when moisture is present.

Indoor mold issues can come in many shapes and sizes. In some instances, mold may be clearly visible growing on surfaces, but in other cases there could be a problem that is completely out of sight. Moisture in an air duct or in a wall cavity could lead to the growth of mold that impacts the air people breathe. This could also be true for mold growing below cabinets and flooring or in an attic or crawl space.

The only way to know if mold growth is problem in a home or building is to have the property inspected by a qualified and experienced professional, such as those found at HTX Mold Consulting Services llc.

What is a mold inspection? Expand

If you suspect that could be mold present within a home, office or school, it is important that you have a Licensed Mold Assessment Consultant examine the property to accurately and comprehensively determine the extent and scope of any contamination that may be present.

The mold professional should examine all aspects of the property, both inside and out, and have access to the instruments, tools and sampling techniques needed to understand what is happening within the property. This is when the experience, training and expertise of a qualified and Licensed Mold Assessment Consultant is needed most to be able to pinpoint an area, or areas, that are causing the mold growth and determine its root cause.

What are some of the health effects of exposure to mold indoors? Expand

The Centers for Disease Control and Prevention (CDC) shares the following information on this topic: Some people are sensitive to molds. For these people, exposure to molds can lead to symptoms such as stuffy nose, wheezing, and red or itchy eyes, or skin rash. Some people, such as those with allergies to molds or with asthma, may have more intense reactions. Severe reactions may occur among workers exposed to large amounts of molds in occupational settings. Severe reactions may include fever and shortness of breath.

People with a weakened immune system, such as people receiving treatment for cancer, people who have had an organ or stem cell transplant, and people taking medicines that suppress the immune system, are more likely to get mold infections.

Exposure to mold or dampness may also lead to development of asthma in some individuals. Interventions that improve housing conditions can reduce morbidity from asthma and respiratory allergies.

What is Black Mold or Toxic Mold? Expand

For anyone that has seen articles or news reports about mold contamination they have likely heard the terms Black Mold or Toxic Mold. These terms are often used by people with little or no expertise in mold issues. 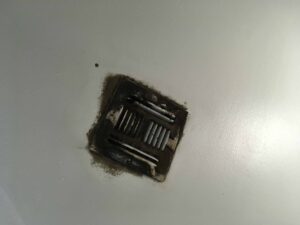 Media reports often refer to a type of mold known as Stachybotrys chartarum (also sometimes called Stachybotrys atra) as black mold or toxic mold. The CDC reports it can grow on material with a high cellulose and low nitrogen content, such as fiberboard, gypsum board, paper, dust and lint. Growth occurs when there is moisture from water damage, excessive humidity, water leaks, condensation, water infiltration or flooding. While the media often fixates on Stachybotrys, the CDC states that all molds should be treated the same with respect to potential health risks. In other words, just because a mold problem in a building does not involve Stachybotrys, does not mean there might not be a problem and potential health concerns.

Another thing to keep in mind is that for some types of mold, depending on its food source and other environmental conditions, could appear black, green or other colors. The color of the mold does not necessarily indicate if it is a potential health threat or if it is toxic.

Some types of mold associated with water damaged buildings, such as Stachybotrys and numerous others, can produce toxins, known as mycotoxins. However, just because a mold that can produce mycotoxins is present does not mean people are being exposed to mycotoxins. Environmental conditions, such as competition from other microbial organisms, can impact whether a mold produces mycotoxins or not. The only way to know for sure if mycotoxins are present is to test specifically for them.

Exposure to any type of mold at elevated levels in the air people breathe or come in contact with could act as an allergen, respiratory irritant or even an asthma trigger in some people. Indoor environmental testing determines what types of mold are present and at what concentrations.

Do I Need a State Mold Certificate and what are the regulations in Texas? Expand

What is a Certificate of Mold Damage Remediation? Expand

A Certificate of Mold Damage Remediation is a Texas Department of Insurance specific document that provides home owners and any potential future buyers of the property with a level of assurance that the mold issue has been eliminated. The Certificate is produced by the Mold Assessment Consultant when the remediation project has been completed and has passed the clearance standards established in the Mold Remediation Protocol. Typically, these expectations include ensuring that the moisture conditions have been corrected so no active moisture conditions are detected, the area is visually free of mold and other debris suggestive of mold, the remediation protocol was followed as written and that analytical samples meet the clearance requirements.

Why do I need a Certificate of Mold Remediation? Expand

Receiving a Certificate of Mold Remediation documenting that the underlying cause of the mold was remediated provides an advantage for a property owner. This certificate prevents an insurer from making an underwriting decision on the property based on previous mold damage or a claim for mold damage. If you later sell your property, the law requires that you provide the buyer a copy of all Certificates of Mold Remediation you have received for that property including supporting documentation. Some banks or insurance companies require a Certificate of Mold Damage Remediation upon completion of a mold remediation project.

Can I just wipe the mold off a surface or paint over it and things will be okay? Expand

When mold growth occurs indoors it is usually found on porous and semi-porous materials. Just cleaning and disinfecting the surface of a material, unless it’s completely nonporous (such as a metal stud), will typically not eliminate the problem. This is due to the fact the mold grows into many porous and semi-porous materials with microscopic roots, just like a plant or tree has roots in the ground. If the moisture or humidity issue ever returns, the mold will usually just grow back. While some moldy materials can be salvaged, others may have to be completely removed and discarded.

Another important thing to remember is that dead (nonviable) mold can still act as an irritant, allergen, asthma trigger and may still contain mycotoxins. This is another reason why HTX performs an in-depth comprehensive site investigation to determine the source and locations of mold growth so an effective remediation protocol can be implemented to not only address the mold issue, but also prevent it from returning in the future.